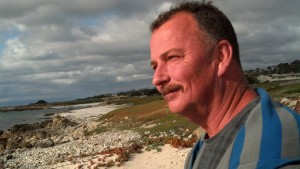 This is the most recent pic of myself. This picture was taken at Pacific Grove in California in Oct, 2015.

I am going to describe my professional life. Not the private one!

On my 17 birthday I joined the Marine Corps. This was the start of my professional career. I had graduated a bit early from high school. I started attending Merced JC, but it was quite a commute from Mariposa where I grew up, so needed to do something else. I had to use my Mom’s car to get to school.

So I joined the Marines! In the Marines I leaned electronic’s via avionics training in Millington Tenn. I repaired avionics equipment. The APX-76 which is an identification system. Friend or Foe. I also worked on the VOR for the C130. Quite a difference in technologies. One had semiconductors and the VOR has “tubes” and “transformers”.

Served my 4 years and entered the real working world. My first job out of the service was a job fixing high pressure and chemical leaks in piping in the refineries in So Cal. Interesting work, but decided to get back to electronics. My back thanked me!

I worked a few different jobs repairing consumer electronics. First at Kenwood, don’t know if you all remember them, they made pretty good car stereos and home audio equipment. I then worked for a few repair companies before I decided to start my own repair company. I named it AudioVideoTronics. I know, a mouth full. I even opened a few branches. As the years passed, the cost of consumer electronics was on a rapid decline. This means less money to repair. SO…. Back to school I went. I always wanted to be an engineer. Way back when, when I went to Merced JC, I wanted to be a Mechanical Engineer. So at this point, I thought it better that I persued Electrical instead. Having all the years of experience.

So part 2 started. After several years without ANY SLEEP, I earned my degree from the University of the Pacific in Stockton. Yee Haaaaa. Time to start getting more than 2 to 3 hours sleep a night. To see my work history, view my resume located on the side panel. I have put links to the companies I have worked for.